Thank you to Bretta DeLuca for putting together this excellent overview of what to expect at a vaulting competition! 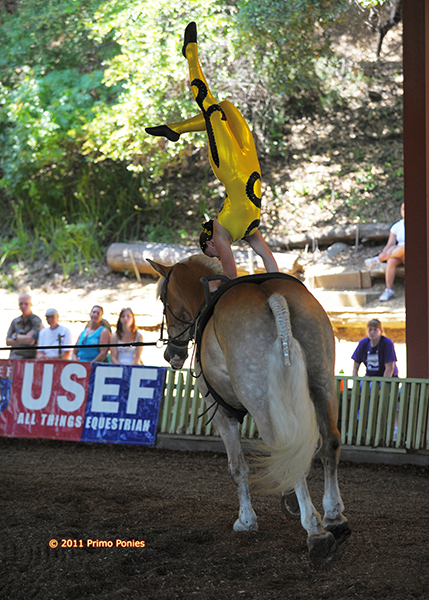 This is where the horses live during the show. The stall area is not open to the public.

Close by there is an area where the clubs can meet up, prepare and hang out. Vaulting is a very social sport.

The main competition arenas are round and have two gates, one in and one out. At the in-gate is the Whipper-in who makes sure everyone is ready on time. The Whipper-in does not use a whip.

Sitting at raised tables are the Judges. Sitting with the Judge are the Scribes, who take notes for the Judge, a Scorer, who does the math and a Timer who…times. Sitting at another table are the Announcer and the Music people.

The barrel is the practice equipment for vaulters. It simulates the size and shape of the horse and surcingle but not the movement. The barrel is important for warm-up, practice and to work out new moves before trying them on the horse. There are also Barrel Classes in competition. They are run the same way as the horse classes except minus the horse, and plus the barrel. Compulsories (see "The Performance") are not judged on the barrel.

Each vaulter belongs to a club. Each club will have many vaulters of different levels. A club may have more than one vaulter competing in a level.

The horse wears a bridle or cavesson on his head for communication and control. Fastened to the this is the long lunge line, which is held at the other end by the lunger. The lunger also holds the whip. The whip is not used to punish the horse but is for communication. Also fastened to the bridle or cavesson are side reins, which help guide the horse. The side reins are connected at the other end to the surcingle, which is a leather band that attaches around the horse. The surcingle has grips, which are handles for holding onto and stirrups which hang down either side for the vaulter to put his foot in for some moves. Under the surcingle is a thick pad to protect the horse's back.

Vaulters wear an outfit that allows the judge to see how they are using their bodies. It is usually very fitted and stretchy to allow for the gymnastic movements required. Usually all club members wear matching outfits. Vaulters must have their hair kept tidy and no jewelry, as either would be a distraction from their performance and a potential safety hazard. Vaulters wear special soft shoes to allow movement and grip but which also have a sole tough enough for landing safely on the ground. For the Freestyle some vaulters wear a uniform which matches their music.

In Provincial and National competitions the Divisions of vaulting are as follows (from easiest to most challenging): FUNdamentals, Walk D, Walk C, Walk B, Trot D, Trot C, Trot B, Canter D, Canter C, Canter B, Canter A, Canter AA.

A typical horse has 4 gaits - walk, trot, canter and gallop. Vaulting is performed at three of those gaits. A gallop is very fast and bumpy so is not good for vaulting. Vaulters begin at the walk and work their way up to canter.

FUNdamentals is a non-competitive class for vaulters just starting out.

A Green Horse Class is non-competitive for a horse that is in the early stages of training.

The vaulters run in with their lunger and horse. They line up before the judge and bow. The lunger sends the horse out and around on the circle. When the judge rings the bell the first vaulter begins by raising their arm to cue the music. Each vaulter performs twice (four times for Canters) during the competition; two Compulsories and two Freestyles. In International competitions the highest level will perform two Compulsories, one Freestyle and one Technical Test.

Compulsories are a series of required movements. Every vaulter performs the same movements in the same order.

The Freestyle is an artistic performance which is designed by the individual vaulter and their coach to showcase their best abilities. It is performed to carefully selected music. The Freestyle must be one minute long. If the vaulter goes overtime the judge will ring the bell and the vaulter must dismount.

The Technical Test is like a freestyle but must include a series of predetermined moves.

After the performances the vaulters, lunger and horse line up before the judge again, bow and run out together.

Occasionally you will see an extra person in the arena. This is a booster who helps the smaller vaulters to mount (get on the horse). The booster is often an older, more experienced vaulter. The sport of Vaulting is proud of its very supportive community spirit. The atmosphere at a vaulting show is always very friendly and fun and you will often see a club share their horse with another club in need.

Some classes are for more than one vaulter. Pairs are two vaulters performing together. A Team is 4 or more vaulters. Team movements can be performed by one, two or three vaulters on the horse at one time.

Music is very important in vaulting. Each piece of Freestyle music is chosen for its rhythm, which must match the horse's gait, and its expression. A Vaulter will choose music that they feel expresses a character in their Freestyle so you will hear many different styles and moods of music. Run In music is played when the club enters and leaves the ring.

Compulsory music is in the background and is often the same piece for all members in a club.

In Compulsories each move receives a score out of 10 then the final score is calculated by dividing.

The final score is the combination of all Compulsory and Freestyle (and Technical Test) scores.

…aren't they wonderful? Vaulting horses can be of any breed but it is common to see draft breeds like Percherons and also Warmbloods. Breeding and appearance are less important than calmness, good balance, good movement, tolerance, patience and good old horse sense. After a horse has shown he has the temperament and personality needed for vaulting he is trained very carefully for the safety of the vaulters. Vaulters love their horses and you will see many expressions of this very special relationship.