If the answer to a question you are looking for is not here, please let us know at [email protected] ! 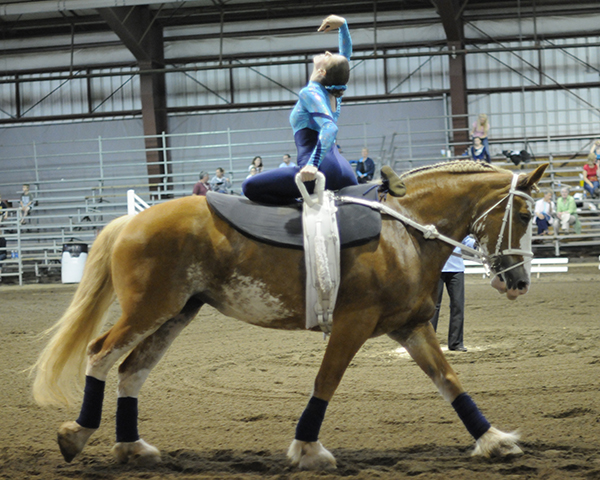 Vaulting is an affordable way to become involved with horses. Vaulting develops rhythm, co-ordination, flexibility, strength, poise, grace, balance, creativity, and harmony with the horse. Vaulting teaches teamwork, responsibility, trust and self-confidence. Vaulting is an excellent introduction to the horse in a safe, structured environment. Vaulting is one of the best ways to introduce people to and prepare them for horseback riding. Vaulting enhances and helps develop the skills of dance, acrobatics and gymnastics. Vaulting has a long tradition of friendly teamwork and camaraderie, which crosses the boundaries of clubs, countries and even continents.

Where did vaulting come from?

People have been performing acrobatic and dance-like movements on the backs of moving horses for more than 2,000 years. Stone paintings, which date back to the Pre-Romanic Ice Period, depict horses with persons standing on them. In the Classical Olympics in Greece “Artistic Riding” was part of the competitions. Modern vaulting was developed in postwar Germany as a way to introduce children to equestrian sports. In 1983 vaulting became one of the seven equestrian disciplines recognized by the FEI (Federation Equestre Internationale).

Is Vaulting a competitive sport?

Some vaulters vault for pleasure only however vaulting competitions are so much fun that most vaulters take part. In BC most clubs attend two or three shows per year, one being the Provincial Championships. Therefore competitive vaulting does not require the huge family and financial commitment of many sports.Some vaulters train long enough to rise to the highest level in the EVA - Canter A. These vaulters often choose to attend a CVI competition internationally in order to qualify to further compete internationally. If these vaulters receive qualifying scores they can earn a place on the Canadian Equestrian Team to represent Canada at the World Equestrian Games.Vaulting is not yet an Olympic Game but has appeared as a Demonstrated Game.

Why have most people never heard of vaulting?

Vaulting is very popular in parts of Europe and is steadily building a following in the USA. Canada is just beginning to grow this sport.

Where are vaulting lessons held?

Each club is different but typically lessons are held in an enclosed indoor arena.

What happens in a typical vaulting lesson?

Vaulting is the safest of the equestrian sports and is documented safer than riding bicycles, playing on playground equipment or trampolines, skating and even playing baseball, softball and soccer. Vaulting is done in a controlled environment in a fully enclosed arena on a consistent, large circle in soft footing. A lunger always controls the horse. Provincial Vaulting Organization member clubs are coached by certified coaches

Do I need a helmet when Vaulting?

Actually, helmets are not allowed when vaulting. For a number of reasons, they become a safety hazard instead of a safety precaution. You can learn more about this on our Helmets and Vaulting page.

Do I need to know about horses to start Vaulting?

Do I need to have a background in gymnastics and/or dance before vaulting?

Absolutely not. And for those who are already involved in dance or gymnastics, vaulting will help improve those skills

Compared to every other horse sport, vaulting is extremely reasonably priced. Club prices differ but they average $75 to $125 per month for once weekly lessons.

What equipment or clothing do I need to buy?

For pre-competition vaulting most clubs only require some stretchy pants (which can be picked up at the local thrift store) and a pair of basic water shoes, making vaulting one of the lowest start-up costs of any kids sport. Once vaulters proceed to competing they need a competition suit, team tracksuit and vaulting shoes. The brand new cost on these averages around $300.00 but often vaulters can purchase pieces that have been outgrown by an older vaulter taking down the cost considerably.

How old do I have to be to vault?

Each club will have its own rules about age but most prefer vaulters to be no younger than 4 or 5 years old.

How Young do I have to be to Vault?

Vaulting is the performance of gymnastic and dance-like movements to music on a moving horse. The horse is controlled by a lunger who sends him in a circle around them on the end of a lunge line which is attached to the bridle the horse wears on his head The horse also wears a special surcingle around his belly which has hand grips and stirrup-like loops for the vaulter’s feet. Vaulters begin working in walk and progress, with training from a qualified instructor, to be able to execute fantastic freestyle performances in the canter.

What is the Vaulting Season?

Vaulting is a year round sport. In British Columbia the Provincial Championships in September wind up a year of competitions but vaulters continue to vault throughout the fall and winter because no one wants to stop.